We maintain a running list of known anomalies, differences, and issues encountered while using Accountable2You with various Linux distributions, shown below. For instructions on installing Accountable2You for Linux, please visit our article found here.

If a known fix or workaround exists, we also provide those steps as well. All suggestions, workarounds, terminal commands, and other guidance are to be followed at the device owner’s discretion and are not directly supported by Accountable2You.

Window text shows as boxes rather than a readable font type. (This can also occur in OpenSUSE.)

Any release with an outdated or corrupted font cache.

After installing the Accountable2You snap and opening the app, device users may be presented with a registration screen where the text shows as boxes (an example is shown below). This is an issue with the font cache on the device. 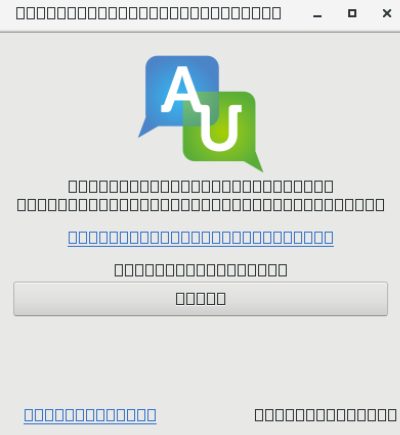 The Accountable2You A2U status icon does not appear in the menu bar.

Use the install app icon: Note that the missing status icon is not an issue with Accountable2You. Desktop environments in some distributions do not openly enable the display of application status icons in the menu bar. Accountable2You is still running - the icon's only purpose is to serve as a status indicator. If you would like to check the status of the A2U app, generate a diagnostic report, or access app exclusions, you may still do so by opening the Accountable2You app from the installed application folder (rather than the menu bar).

Unable to install Accountable2You for Linux on Mint 20. Upon attempting the installation of the Snap Store, an error "Package 'snapd' has no installation candidate" is displayed in Terminal.

The Linux Mint team has made the decision to disable the Snap Store on Mint 20 and greater, for all of their distributions. You can view the release notes here.

The steps below are provided by the Linux Mint team and are not directly supported by Accountable2You. Many customers and our support team have followed these same steps without issue, but as always when modifying system files on your computer, we advise you to proceed solely at your own risk.

Did this answer your question? Thanks for the feedback There was a problem submitting your feedback. Please try again later.
Last updated on August 3, 2021